The clock tower drinking fountain in Rotherham, England was commissioned by James Hastings, a local businessman, to commemorate the coronation of George V and Queen Mary. Manufactured at Walter Macfarlane’s Saracen Foundry of Glasgow, the 32 feet tower was installed in 1912 at Effingham Square, Rotherham.

The front of the octagonal pedestal offers a large drinking trough for horses supported by legs in the form of hooves and fetlocks. Receptacles for human consumption are supplied in the form of small basins with a trefoil art-form located between the basin and the tap above. Bands of quatrefoil fret are in each of the eight panels surrounding the pedestal. Seated above angled gables are eight commemorative panels, four of which are blank arch faceplates. Four panels are rectangular with a peaked terminal. An inscription on the panel at the front of the structure states, To Commemorate the / Coronation of / King George V / and / Queen Mary, and a panel on the side is inscribed, Presented By / James Hastings / of Rotherham.

A two tiered acroter supports an attic base with four slender columns from which decorative pendant lamps are suspended. The column capital supports a four sided clock bound by decorative spandrels. The acroteria is edged with elaborate scroll relief, and at each corner is an acorn finial, a symbol of life and immortality. The structure is surmounted with a decorative openwork corona terminating in a ball finial. A chiming bell cast by John Taylor & Co of Loughborough is suspended in the centre of the corona. The clock mechanism was made by John Mason of High Street, Rotherham.

During redevelopment of the area, the tower was relocated from Effingham Square to Walker Place in 1969. It was listed as a grade II historic building in 1986.

In 2013 restoration of the Hastings Clock by Calibre MetalWork included cleaning, repair and repainting of the cast iron structure; and clock restoration specialists Smith of Derby refurbished the physical clock and serviced the timing mechanism before it was returned to its original location in Effingham Square.

Trough prior to restoration 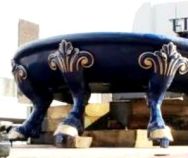 Glossary
Acroter, flat base
Acroteria, an ornament placed on a flat base and mounted at the apex of the pediment
Attic base, a column base with two rings
Capital, the top of a column that supports the load bearing down on it
Corona, a crown
Finial, a sculptured ornament fixed to the top of a peak, arch, gable or similar structure
Fret, running or repeated ornament
Gable, triangular portion of a wall between edges of a dual pitched roof
Quatrefoil, a type of decorative framework consisting of a symmetrical shape which forms the overall outline of four partially-overlapping circles of the same diameter
Spandrel, the triangular space between two arches
Terminal, statue or ornament that stands on a pedestal
Trefoil, An ornamental design of three rounded lobes

One response to “Hastings Clock”