Following the completion of a public water supply system by the City of Hamilton in 1884, First National Bank donated a drinking fountain to the city in 1890. It was located near the main entrance of the bank in the Shuler and Benninghofen block on High Street. 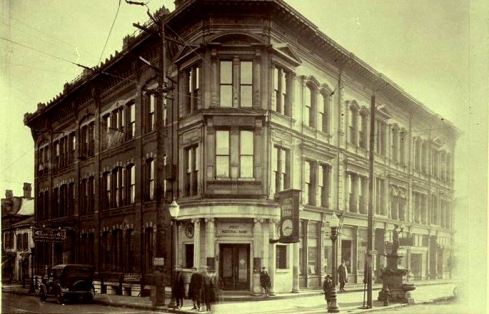 The two images shown below at the northeast corner of Third and High Streets show the Shuler and Benninghofen block decorated for the 1891 centennial. Note that there are only forty-four stars in the hanging flag. Click to see larger image. 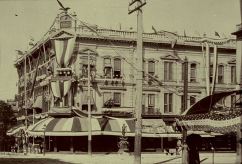 The Great Flood of 1913 covering more than four-fifths of Hamilton was Ohio’s largest weather disaster, and was the most wide-spread disaster in the history of the United States. Within the city the storm dropped between 4-8 inches of rain in 4 days. The fountain which is approximately 11’ 8” high is barely visible at the right edge of the image below. 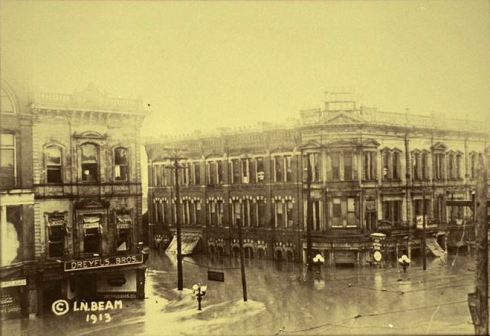 In 1929 the drinking fountain was removed to enable construction of the new First National Bank building, and for the next 47 years, it stood in the yard of a private residence on Haldimand Avenue on Hamilton’s West Side.

First National Bank re-acquired the fountain in 1975 and discussions between the bank and the Butler County Historical Society generated a plan to restore the fountain. Hamilton Foundry recast broken and missing pieces, and a Cincinnati sculptor was retained to clean, refinish and reassemble the fountain. It was reinstalled at its original location in front of the bank at Third and High Streets in 1976 as part of the United States Bicentennial observance.

In 2012, the bank now renamed First Financial Bank entered into an agreement with the city to demolish an older building at the intersection of Martin Luther King Boulevard and High Street to create a small park and relocate the fountain there in exchange for a city-owned parking area off Market Street.

When the structure was moved the maker’s plate, J.L. Mott N.Y., originally located at the front face of the capital beneath the statue, was attached to the rear of the structure where an additional plaque reads, Restored 1975 by Hamilton Foundry and First National Bank. 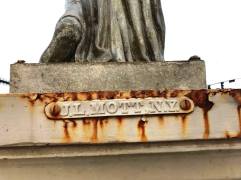 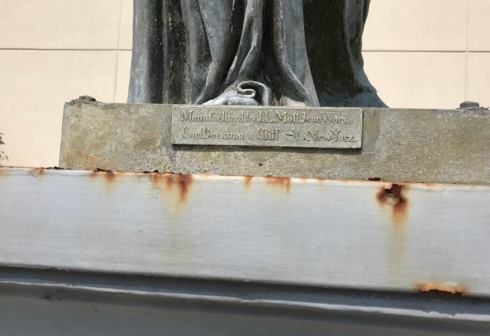 Eight arched cornices contain dolphin masks which were symbolic of guardians of water. The fountain supplied refreshment to humans via a dolphin mascaron which spouted water into a demi-lune fluted basin facing the sidewalk. A drinking cup was suspended on a chain.

Horses drank from a large circular fluted trough facing the street from which overflow water fed two smaller basins for the refreshment of smaller animals. A plaque located above the horse trough is inscribed; First National Bank.

An attic base supports a short column containing 4 inset panels bound by pilasters. The panels offered bas-relief with the option of a dedication plaque.

The capital supports a statue of Hebe, a Greek goddess, based on the 1806 sculpture by Berthel Thorvaldsen. The daughter of Zeus and Hera, Hebe is the Greek goddess of Youth and Spring, and proffers the cup of immortality at the table of the gods. The statue is classically dressed in flowing robes gathered at the waist. Her head is tilted down and to the left, and her hair is held by a headband or ribbon. Her left leg is bent and her weight is on her right leg. (This stance is called contrapposto, where one leg bears the weight and the other leg is relaxed.) She gazes at a raised cup in her left hand while holding a pitcher beside her right thigh. 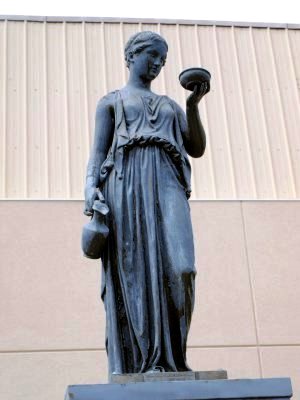 In acknowledgment, I would like to thank Jacob Stone from City Hall who furnished me with several images from the Lane Public Libraries’ Cummins Photo Collection in addition to taking a current status photograph. His prompt, generous and willing assistance is to be commended. https://www.facebook.com/HamiltonOH/

The City of Hamilton is a sculptural hot-spot featuring in excess of fifty public sculptures around the downtown area with an equal number just a short distance away at Pyramid Hill Sculpture Park. Hamilton is located at the southern end of the Great Miami Riverway in southwest Ohio.