The cast-iron drinking fountain built into a wall next to a railway platform is dated circa 1875. The font, casting number 17 (4ft 5 x 2ft 10) from Walter Macfarlane’s catalogue, was manufactured by the Saracen Foundry in Glasgow, Scotland The design utilizes features of the canopy used in drinking fountain number 8, and is surmounted by a palmette finial. Griffin terminals flank a highly decorated arch outlined with rope detail which also encircles a medallion hosting the image of a crane. The recessed interior of the arch contains a shell lunette from which a tap protrudes. A single drinking cup on a chain is suspended above a fluted demi-lune basin.

Symbolism was popular in Victorian times. Griffins are symbolic of guardians of priceless possessions, and cranes, recognized as a symbol of vigilance, are often depicted standing on one leg while holding a stone in the claws of the other foot. Legend states that if the watchful crane fell asleep the stone would fall and waken the bird.

The fountain which stands outside Gilbreath Hall has been in situ since the early days of the institution. The drinking wells were painted silver when it was restored circa 1950. It has been repainted or restored since.

The structure cast by J.L. Mott Iron Works is 7ft 8ins high with a base 2ft 7ins square. It consists of a square central column seated with attic base. Each of the four sides hosts a demi-lune fluted basin. The interior of a recessed arch is decorated with shell bas-relief and a dolphin mascaron from which water spouts. The tail of the dolphin extends outside the arch and is flanked by two nipple discs. A concave curve with decorative frieze and egg and dart molding sits beneath the capital which supports a triple stepped tier surmounted by an orb finial. 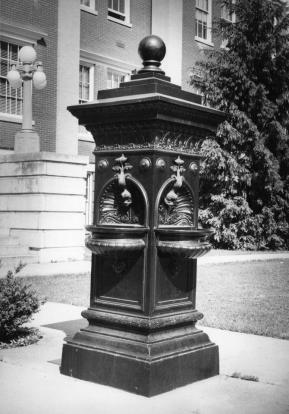 The fountain which once stood at the end of Shandon Street in Brown’s Square adjacent to the North Gate Bridge supplied drinking water to the north side of the city. The area served as a place for traders and vendors to sell their goods. The image below shows holly for sale dating it in the Christmas season.

The drinking fountain was donated in April 1883 to the Cork Corporation in memory of Reverend Nicholas Colthurst Dunscombe who was ordained in 1823, a leading Protestant clergyman, Rector of Temple Michael De-Duah, and a founding member of the Temperance Movement in the city. As an advocate for moderation in alcohol consumption a drinking fountain was a very suitable memorial. 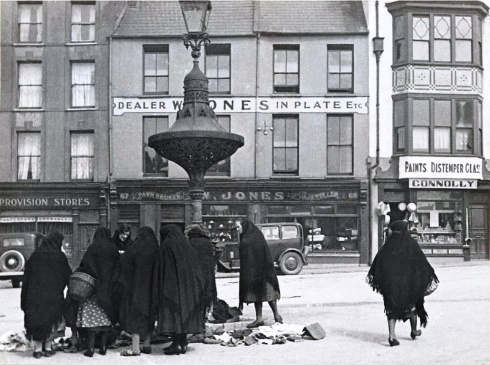 A committee administered donations to fund the construction and erection of the fountain which was in situ from 1883 until 1935 when it was removed. There is no record of the reason for its removal or the whereabouts of its relocation.

The design was registered by George Smith & Co. and manufactured by the Sun Foundry. It was seated on a two tiered octagonal plinth. A compass cross base with canted corners supported a central pedestal and four columns decorated with diamond frieze and nail head molding. The font (design number 13) was a large basin with dog tooth relief on the rim, partitioned by four foliate consoles from which cups were suspended on chains. Shell motif spouts on each side released water flow.

A central column with engraved dedication supported an inverted umbrella-style canopy with highly decorated acanthus scroll work. The cornice was intricate open fret detail with four consoles supporting glass globes lanterns lit by gas. The dome consisted of eight panels rising to two bands; one of open filigree and the other engraved bas-relief. An ogee roof supported the lamp finial with crown and pyramid apex. 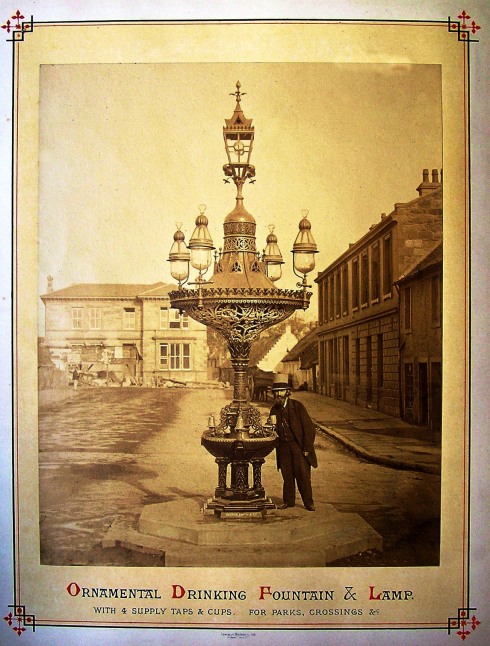 A Victorian drinking fountain located outside the Natureland Seal Sanctuary and Wildlife Park in Skegness was originally erected beside a lamppost near the Hildred Hotel at the junction of High Street and Lumley Road in the late 19th century. 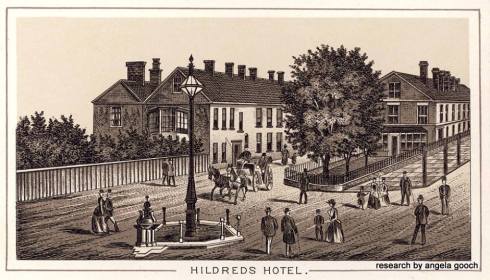 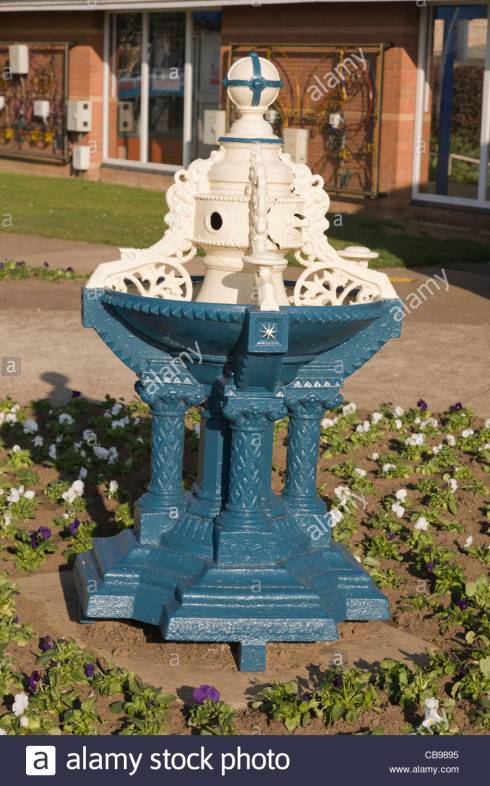 The fountain is design number 13 by George Smith & Co. manufactured by the Sun Foundry. The base is in the form of a compass cross with canted corners. It has a central pedestal and four columns decorated with diamond frieze and nail head molding which supported the font. The large basin has nail head relief on the rim and is partitioned by four foliate brackets from which cups are suspended on chains. Shell motif spouts on each side release water flow. The structure is surmounted with a chained orb terminal. The base is 2ft wide, basin is 2ft 9” wide and the height of the structure is 4’ 9”.