The town’s name derives from a shortened form of the word, hospital. A hospital dedicated to St Bartholomew, was built in the 13th century to take care of lepers.

St John’s parish church was built in 1867 on Main Street. The cast iron drinking fountain seated on a three tier square plinth was once located at the corner of Main Street and Sea Road not far from the church.

Design number 4 standing 4 feet 9 inches high from Walter Macfarlane’s catalogue was manufactured by the Saracen Foundry in Glasgow featuring a single pedestal with decorative bands seated on an octagonal base. Rising from the etched basin was a bulbous form supporting a pointed finial and two consoles from which metal cups were suspended on chains. 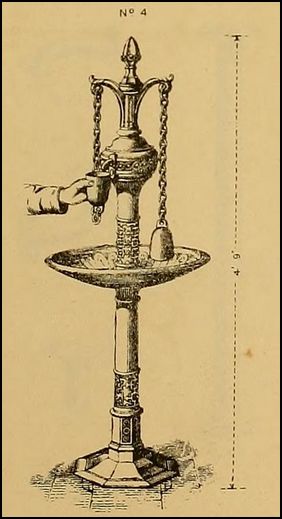 Little is known in regard to the installation and subsequent removal of this ‘lost’ fountain.

This cast iron drinking fountain with lamp was presented to the town in 1899 by David Doig (a past master of Dunoon Masonic Lodge 1879-1882 & 1890-1894). It is located in Hanover Street Gardens adjacent to St. John’s Church.

The fountain is design #31 from the catalogue of Walter Macfarlane’s Saracen Foundry in Glasgow. Seated on a two tier circular stone plinth, the wide base is in the form of a St. Andrew’s cross with four lion jambs supporting four elaborately decorated quatrefoil basins for horses. The stanchion is decorated with bands of acanthus and alternating panels of cranes and swans. 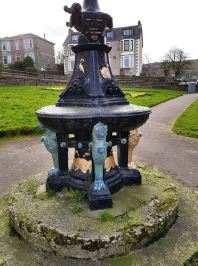 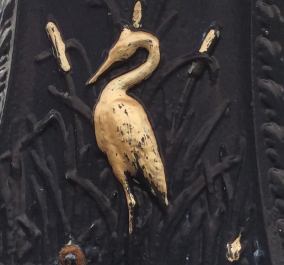 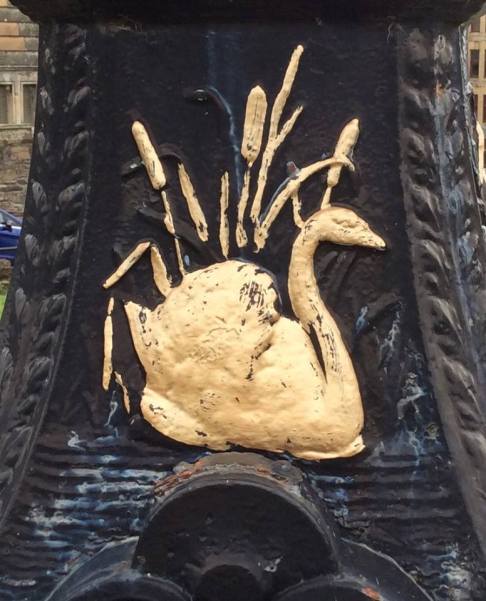 Four consoles which protrude from a circular fluted shaft to suspend drinking cups on chains are unique and differ from the standard issue. The structure is surmounted with a round lamp.

Plans to repair and restore the drinking fountain were initiated in 2016.

Wall fountains not surprisingly required a supporting wall. These decorative drinking fountains were set into the wall to form unobtrusive niches – a design that was very popular on railway station platforms. Although they provided a necessary service in a period of history when clean drinking water was not readily accessible, there generally appeared to be so little commotion at the erection of these structures that their individual history has been lost. The Saracen Foundry owned by Walter Macfarlane & Co. offered several models.

Casting number 15 (2ft. 9ins. x 1ft. 9ins.) is a wall mounted drinking fountain with a fluted demi-lune basin and egg and dart rim. An arch faceplate bears the inscription Keep the Pavement Dry. The interior of the arch contains a shell lunette from which a tap protrudes. Two doves represent the symbolism of the spirit drinking from the water of life. A single drinking cup on a chain is suspended on a decorative console.

Examples of this model located in Bridgnorth, England; Clevedon, England; and Shanklin, Isle of Wight have previously been posted. 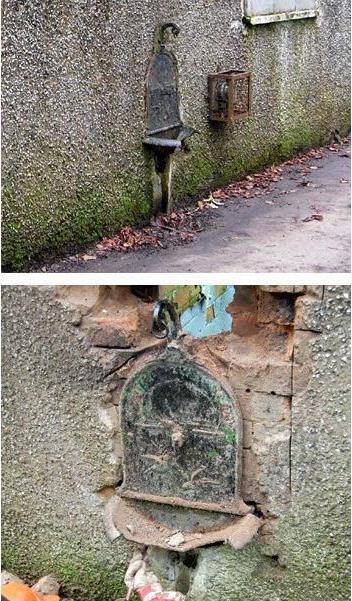 Casting #16 (3 ft. 3 ins. high and 2 ft. 7 ins. wide) is a wall mounted drinking fountain in the form of a round arch trimmed with highly decorated fret detail and rope moulding. The recessed interior of the arch contains a shell lunette with a tap which issued water into a fluted demi-lune basin. The fountain is surmounted with a palmette finial and a ring from which a single drinking cup was suspended on a chain. See previous posts: Innerwick and Peebles in Scotland, and Ramsey, England.

The example below located at Dumfries Railway Station on the northbound platform is functional. A second example on the southbound platform has no tap. The station and all parts thereof are a category B listing as designated by Historic Environment Scotland. 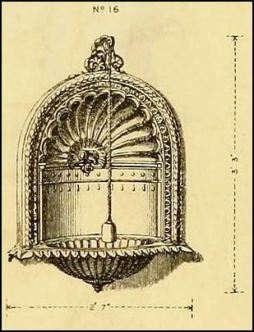 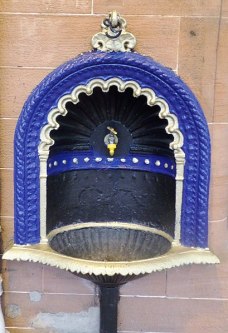 The model below is an  extended version of Design No. 16 with a ground drainage basin. An inscription in raised letters is located above the tap; Thank God From Whom All Blessings Flow. 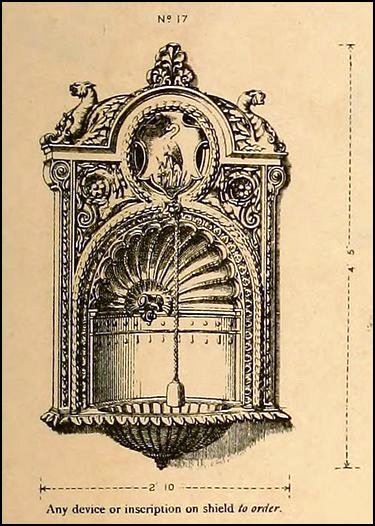 Casting #9 is a small drinking fountain measuring less than 2ft. wide and 2ft. high. It has a plain backplate devoid of decoration in the form of a shield. A spigot emerges from an embellishment in the shape of a diamond with dog tooth frieze. A drinking cup was originally attached to a chain, and run off water was captured in a plain demi lune basin.

This example is located in Gigha, Argyll & Bute, Scotland opposite the post office and is in an advanced state of rust. It is situated almost at ground level on a stone wall, adjacent to entrance gates to the Gigha Church of Scotland. 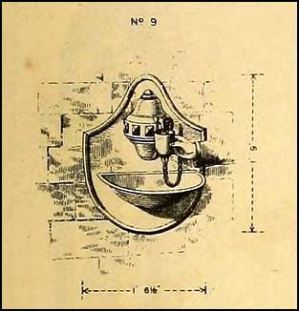 Casting #5 is a 4ft. tall cast iron plate. The drinking fountain on the wall of the Guardbridge Hotel (previously the station house) bids you to Keep The Pavement Dry. An arch shape with quatrefoil bas relief displays the acronym for North British Railway, NBR. A spigot protruding from the same point furnished water into a single drinking cup on a chain suspended from a decorative console (no longer present in these images). A decorative flourish is applied as an enrichment. The example at Leuchars Railway Station no longer exists. 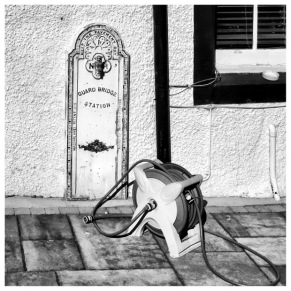 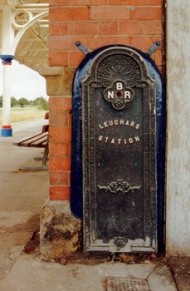 An example of modification to design No 5 is located on the boundary wall at the current Social Services Department (formerly Abbotshall Primary School). It was recorded as a C listing on Historic Environment Scotland on 27 February 1997.

The corner of Stair Park on Henrietta Street once hosted an attractive drinking fountain surmounted by a female statue.

The fountain, erected on a large four tier plinth, was design number 19 from the catalogue of Walter Macfarlane & Co. The wide base was in the form of a St. Andrew’s cross on which was set a circular shaft ornamented with water lilies. Four lion jambs supported four highly decorated quatrefoil basins. Symbolism was popular in Victorian times; lions are symbolic of guardianship.

The stanchion and central column were decorated with floral relief. Four consoles protruded from the column to suspend drinking cups on chains. The capital supported the finial, a statue of a female figure holding a leaf above her head.

Unfortunately the drinking fountain and its history are lost.

Fort William was supplied with incandescent street lighting in 1896. Two lights were incorporated into horse troughs one of which also contained a drinking fountain for humans. Photographic images show it at the junction of High Street and Station Square on March 5, 1897. It was no longer present in photographs dated 1956. 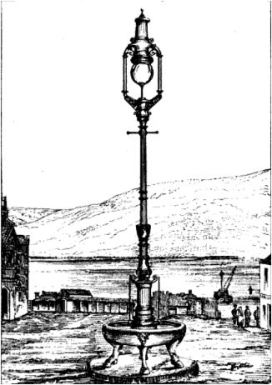 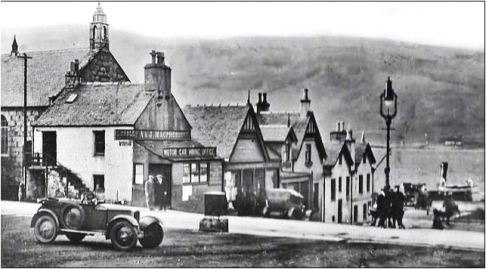 The structure was design #80 manufactured by Walter Macfarlane & Co. in the Saracen´s foundry, Glasgow. It was advertised as well suited for Street Crossings, Squares, Market Places, etc., as it afforded drinking accommodation for a large number of horses and drivers, and effectively lit a wide space, with the least possible obstruction to other traffic. It was 12ft 9ins high providing a circular cast iron basin supported on legs in the form of horses’ hooves. The water was regulated by a small patent cistern, which was self-acting, and when the troughs were full the ball rose and shut the water off.

The central stanchion with attic base supported a central fluted column and the option of a shield for inscription. Four projecting consoles suspended cups on chains that allowed humans to drink from spouting water (the water flow was operated with two bib valves which released water when pressed). A bulbous form engraved with acanthus bas-relief demarcated the transformation of the column into a lamp pillar with lantern. Yoke maintenance arms were positioned beneath the lantern.

Harrison Park which was presented to the Town in 1896 by the Harrison family in memory of their parents is home to a unique cast iron drinking fountain. Manufactured by the Scottish firm of Glenfield & Kennedy Ltd. it was restored during regeneration of the park in 2003.

The pillar fountain advertised as model D34 has a square base with a Greek geometric design often associated with Alexander Thomson. Four panels edged with rope frieze contain lion mascarons and a sun/flower orb. One of the panels identifies the manufacturer; Glenfield & / Kennedy / Limited / Kilmarnock.

Four basins with scalloped edge are located beneath the lion heads which spout water. Drinking water was originally captured in tin cups and overflow water fell into the basin and was directed to small troughs at ground level for the use of animals. The capital supports a base with dog tooth frieze surmounted by a putto blowing a horn with a stylized dolphin resting at his feet. A new casting of this statue was created as part of the fountain’s restoration. 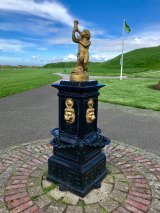 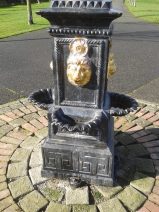 A second drinking fountain was located at the Pier Head tram terminus in New Brighton. Design number 19 was manufactured by the Saracen Foundry in Glasgow. Seated on an octagonal plinth, it had a wide base with canted corners supporting a circular shaft ornamented with water lilies. Four lion jambs supported four highly decorated quatrefoil basins. The stanchion and central column were decorated with floral relief and projecting acanthus.

The lamp pillar contained four protruding consoles which suspended drinking cups on chains. The column terminated in an elaborate design featuring two lanterns. Symbolism was popular in Victorian times and lions were symbolic of guardianship. 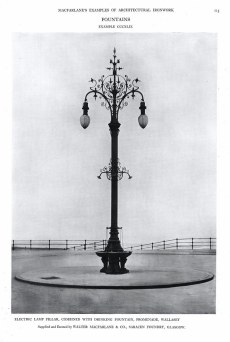 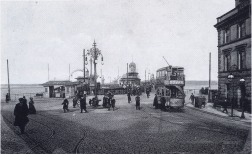 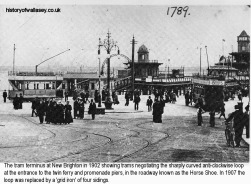 On Marine Parade at Hunters Quay and Kirn there are two cast iron drinking fountain canopies. Although the canopy at Kirn has been restored both structures have lost original elements.

The structure at Hunters Quay is situated at James Street near Jim Crow Rock.
Three of four medallions are missing and the fourth contains a dedication shield. Only two of four original griffins remain, and the space beneath the canopy where the font once stood is empty. 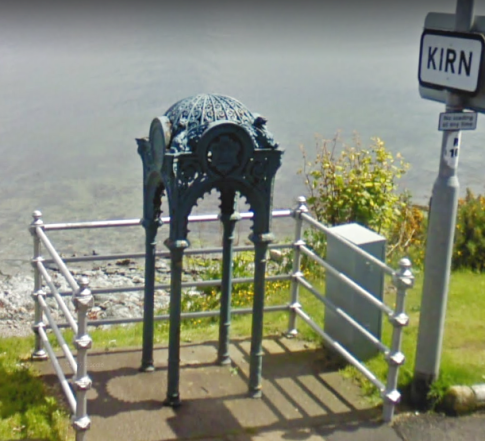 The Kirn fountain is located between Kirn Brae and Stewart Street.

Photographs of the original structure show elements that are now missing such as griffins on each corner of the canopy, the finial at the top of the dome, and the font which has been replaced with a planter. A dedication plaque states, The Gift Of / The Directors / Of The Kirn Pier / 1877. 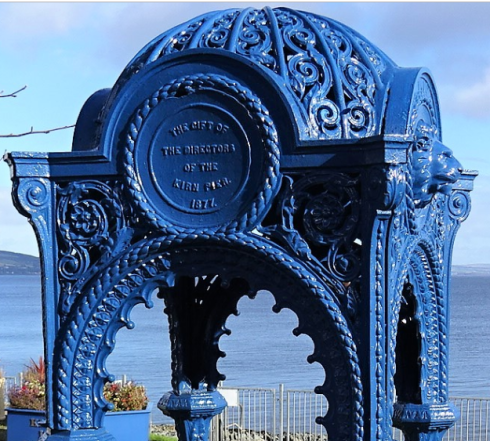 Within an image from 1899 the font beneath the canopy is #7 with a dog trough at ground level. Lion head medallions are visible and the structure terminates in a gas lamp finial.

By 1903 the font has been replaced with an enclosed pillar model.

The gas lamp holder no longer exists in 1907 and has been replaced with what appears to be the model of an owl. One of the lion medallions is missing. 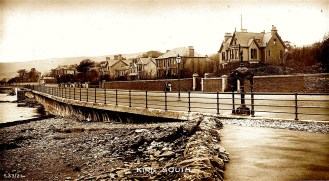 Pictorial evidence between the years of 1907 and 1938 identifies that the structure remained to have a pillar font with owl finial atop the dome. 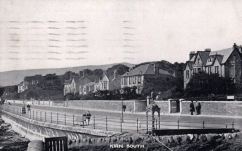 These drinking fountains, customized from design number 8 in Walter Macfarlane & Co.’s catalogue, were manufactured at the Saracen Foundry at Possilpark in Glasgow. The structure is 9 feet 6 inches high and consists of four columns, from the capitals of which consoles with griffin terminals unite with arches formed of decorated mouldings.

Rope moulded cartouches within each lunette host a lion mascaron and a dedication shield. On two of the sides provision was made for receiving an inscription using raised metal letters; whilst on the other two sides was the useful monition, Keep The Pavement Dry. Civic virtues such as temperance were often extolled in inscriptions on drinking fountains. The structure is surmounted by an open filigree dome, the finial was a gas lantern.

Under the canopy stood the font (design number 7) 5 foot 8 inches high. The terminal was a crane. The basin (2 feet 6 inches in diameter) which has a scalloped edge and decorative relief was supported by a single decorative pedestal with four pilasters and four descending salamanders, a symbol of courage and bravery. A central urn with four consoles offered drinking cups suspended by chains. The fountain was operated by pressing a button.

Symbolism was popular in Victorian times. Griffins are symbolic of guardians of priceless possessions, salamanders display bravery and courage that cannot be extinguished by fire, and cranes are recognized as a symbol of vigilance.